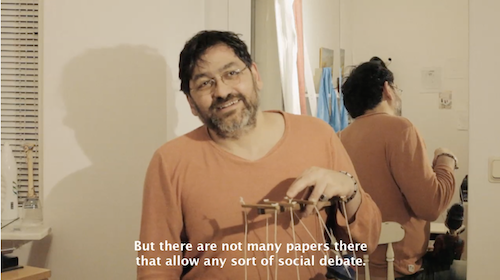 A quote from an interview conducted in Vartiosaari: Dream Interviews, Compilation I: “It’s alright to have realistic dreams, because they can come true some day. That’s why you can actually have them. Then there are dreams that you know will never come true. They are like short-lived butterflies, it’s nice that they exist, because if you don’t have any dreams, it’s like a death.”

The interviews explore our relationship with dreams, but they also examine other things: how dreams can come true as well as work, everyday life, disappointments and what it means to abandon a dream. In 2014 and 2015, I interviewed people in Finland, Sweden and Berlin; in 2015 the interviewees were mostly female immigrants. The purpose of the project is to approach different groups and generate interaction outside the sphere of everyday life by discussing personal hopes and dreams. I believe that meeting people and sharing their experiences can create understanding and trust across different cultures and experiences. This is particularly important in these restless times when difference can be perceived as suspect. My aim is also to highlight and give voice to people whose predicament and everyday life often remain unrecognised.

Dream is a pilot project that was previously presented in Berlin and Porvoo in 2014. The new version was presented in MUU Gallery, Helsinki, from 30 October to 29 November 2015, and in the Poriginal Gallery in Pori in 2015. A catalogue relating to the exhibition was released on 29 November 2015 at MUU Gallery. Dream Interviews I-III, invitation exhibition was at Gallery Uusi Kipinä in Lahti Finland.